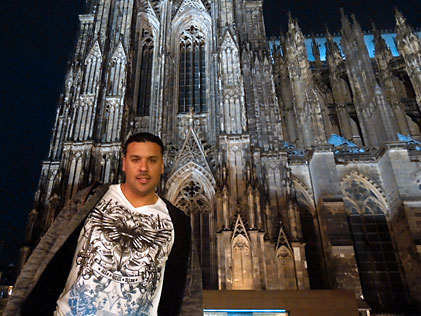 Bermudez spent more than 18 years in prison for the shooting death of a 16-year-old boy in New York City. He was freed in 2009 after it was proven that police and prosecutors manipulated the eyewitness evidence against him.


Since my exoneration in 2009, I have traveled the world sharing how I survived over 18 years in New York prisons until I was proven “actually innocent.” I do this to help prevent the incarceration of innocent people around the globe. My recent seven-city lecture tour throughout Germany with my wife, Crystal, renewed that challenge. During my years in prison, I studied different cultural perspectives on the criminal justice system. Now that I’m free, I yearn for the application of those studies. Lecturing internationally also provides me with the opportunities to exchange and learn about cultural differences in our imperfect world.

From Bochum to Tubingen, my German university law school and police academy lectures examined German and American laws to explore differences and improvements for each. Unlike America, Germany has no grand jury, no death penalty and avoids criminal charges against juveniles as adults.

, equivalent to American indictment. When a criminal trial, or

, is necessary, a judge advances a defendant’s case by organizing the evidence and questions. Moreover, unlike discovery rules to disclose evidence in America, disclosure of a prosecution’s case in Germany to a defense lawyer before a trial is often automatic as a precaution against the dangers of prosecutorial misconduct. German prosecutors are also required to lead criminal investigations before police to ensure fairness.

I contrast these differences to demonstrate why both legal systems are nevertheless prone to problems derived of human error—such as mistaken eyewitness identifications. However, I believe the German legal system better protects the innocent from prison. On the other hand, in America even the lowest compensation statute offers better financial assistance to the wrongfully convicted than in Germany.

Beyond my academic grind, interacting with my German hosts added unforgettable benefits, too. Hearing students, lawyers, judges and professors share their determination to improve criminal justice systems worldwide inspired me. One student confided that my story encouraged her to stay in law school because she wanted to quit. Others giggled over an apparently demented correctional officer I knew dubbed Officer Marshmallow.

I also shared my story over dinners of Currywurst (a type of sausage) and seasoned geese with dark beers known as “dunkels” while raising mugs to say, “Prost.” These were foods that Crystal and I had never tried before. Likewise, my reserved German hosts were introduced to my Latin American custom of hugging.

Crystal and I also found time to venture out on our own. We accidentally crashed a rooftop party in Berlin offering complimentary wine and great pictures of the Brandenburg Gate, and then afterwards we strolled alongside the Rhine and Danube rivers in Wiesbaden and Passau after peaking at the Baltic Sea in Greifswald. These experiences would have been unimaginable to me during my many years of wrongful imprisonment.

Ultimately, our lecture tour concluded with a visit to the Strasbourg Cathedral in Strasbourg, France, where inside I thanked God for the opportunity, and asked preparation for my nine-city lecture tour throughout Japan in October 2013 where I will spread more seeds for justice.