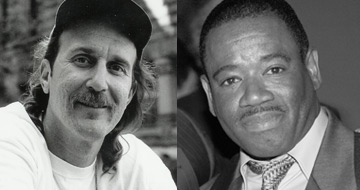 Eight years ago tomorrow, Ray Krone (left) became the 100th DNA exoneree in U.S. history, when he was freed in Arizona after 10 years in prison — including four on death row — for a murder he didn’t commit. And three years ago today Jerry Miller (right) of Illinois became the 200th person exonerated through DNA. The causes of these men’s wrongful convictions point to significant weaknesses that persist today in the American criminal justice system.

Krone was convicted of a 1992 Phoenix murder and sentenced to death, despite strong evidence of his innocence. The victim in the case was found in a bar bathroom with a bite mark on her body. Hairs, shoeprints and other evidence were noted and collected by police. Among the most persuasive evidence against Krone was the conclusion of a bite mark analyst who said he was “medically certain” that Krone left the marks on the victim’s body.  Other unvalidated forensics were also presented against him at trial.

His first conviction was overturned, but another jury found Krone guilty. The judge refused to sentence him to death, saying  “the court is left with a residual or lingering doubt about the clear identity of the killer.” Finally, in 2002, Krone’s appellate attorney obtained access to biological evidence that prosecutors had claimed to have lost. The results excluded Krone and implicated another man as the real perpetrator.

other wrongful convictions based on faulty bite mark analysis

Jerry Miller, who was exonerated three years ago today after serving nearly a quarter-century in Illinois prisons, was wrongfully convicted based almost exclusively on eyewitness misidentification, the leading cause of wrongful convictions overturned through DNA.

Read more about his case here