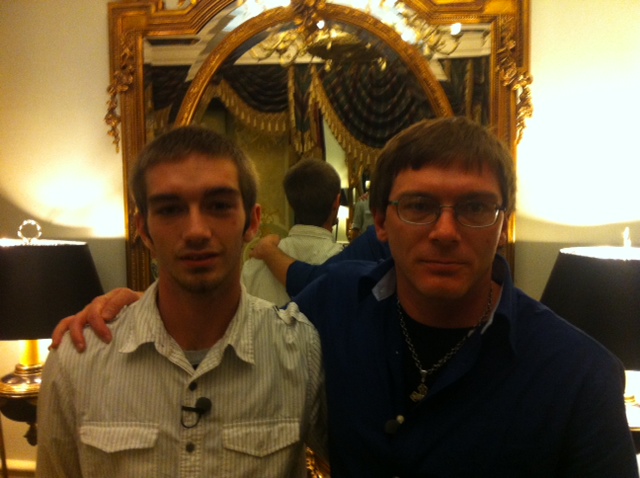 In 2014, the Innocence Project in Print published a feature article entitled “The Ties that Bind,” which told the stories of Damon Thibodeaux and Michael Morton, two men who through each of their wrongful convictions remained deeply committed to their sons. Today, in honor of Father’s Day, the Innocence Blog revisits Damon’s story.

When asked recently whether it’s challenging for him to maintain a relationship with  his son Josh, Damon Thibodeaux said, “As far as I’m concerned, there is no effort at all in having a relationship [with Josh]. It comes naturally.”

For anyone familiar with Damon’s story of being wrongfully convicted of murder and sentenced to death before being exonerated in 2012, his response may be confusing. After all, until Damon was released from death row, it had been many years since he and Josh had seen one another. It was completely feasible that Damon’s chance to know his son could have been lost the moment he was found guilty of murder. But hearing Damon, 40, speak about his relationship with his son — with enough certainty and attachment to stir envy in anyone who’s yearned for stronger family ties — it’s clear that their bond is strong.

It goes without saying that Damon’s relationship with his son defies all conventions. In 1996 Damon, young and alone, had just moved from Texas to Louisiana to be in close proximity to his family. He was going to great lengths to strengthen ties with his own mother and to create a connection with his young son, Josh. He had secured a job as a deckhand, and was staying with distant cousins he had recently met while he saved up money.

But that July, Damon’s life unraveled. His 14-year-old cousin, Crystal, was found dead by a river. Even though there was no evidence tying Damon to the crime, he was put through a grueling interrogation and eventually falsely confessed. At his trial in 1997, he was found guilty and was sent to Louisiana’s Angola state prison to be put to death.

At Angola, Damon spent 23 hours a day in solitary confinement. Just a year prior, he had been looking forward to the future. Now he could only count on his eventual execution. His mother was distraught.

“I think it crushed her,” says Damon. “How hard is it to see your child taken onto death row, especially knowing that he’s innocent? It took a lot out of her.”

As for his relationship with Josh, Damon was unsure whether he’d ever know his son. Was there any point to Damon contacting Josh if his own fate was capital punishment? Would his son want anything to do with him, a convicted killer on death row But Damon was met with surprise when he received an unexpected letter from Josh’s mother when Josh was around 13.

“She said that he was starting to ask questions about me. She wanted to know what to tell him about my situation.”

On Josh’s 14th birthday, Damon sent him a letter. He wrote, “I hope that this card finds you well. You have questions and I want to answer them. I want to know you, so please write. Being friends is the first step to a relationship. I wish you much love on your 14th birthday.”

“There was some trepidation,” says Damon. “He was growing into his own man. He had heard of my case, and it was a murder case.” Damon didn’t know how or even whether Josh would respond.Josh wrote Damon back. He eventually wanted to know everything about Damon’s case. Damon put him in touch with his lawyers.

“The more he learned about my case, the more outraged he got,” says Damon.

Eventually, Josh asked his father if he could visit him on death row. Damon desperately wanted to see his son, but told Josh that he simply couldn’t oblige his request. Damon explained, “He didn’t agree with my decision and he still doesn’t. But it was going to be the first time that he saw me since he was a young child. I didn’t want to be bound in chains.”

Despite not seeing Damon fact-to-face, Josh’s desire to know his father never wavered. Josh’s and Damon’s relationship flourished over the next six to seven years. Finally, after working with a team of lawyers — from the Innocence Project, the Minnesota law firm of Fredrikson & Byron, the Capital Post Conviction Project of Louisiana, the Capital Appeals Project of Louisiana and the ACLU — Damon was eventually exonerated in 2012.

“Upon release,” Damon says, “building a relationship with Josh was like putting on a well-worn, comfortable shirt. I was wondering if he would be as relaxed around me as I was going to be around him. He was fine.”

Damon lives in Minnesota now. Josh lives in Georgia. The two regularly speak and make a point of seeing one another when possible.

“I recently saw him when we were both traveling for work,” says Damon. “We met up in a parking lot and just talked. We maintain a connection, which is important, especially since I wasn’t able to be around while he was growing up.”

In terms of the future, Damon said that his goal is to spend as much time as possible with Josh, and with his own mother and brother. And in a year or two, he said, “I plan to take a year off and backpack around the world.”