An Exoneree Speaks at a Synagogue before the Jewish Holidays 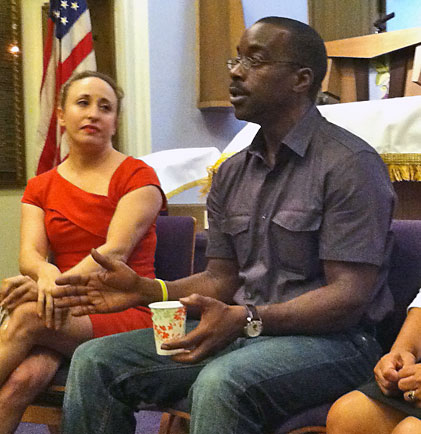 
Director of Development and External Affairs

service ushers in the high holidays of Rosh Hashanah and Yom Kippur. As a Shomrei member and staff member at the Innocence Project, it was my privilege to share the IP’s work with my community at a time when we reflect on issues of new beginnings, forgiveness, and justice. I thought it was particularly appropriate during this very introspective period to be reminded of the extraordinary capacity of people to fully embrace life despite suffering enormous injustice.

Alan spent 22 years in prison for a crime he did not commit, after being wrongfully convicted due to eyewitness misidentification. During his time in prison, he drew upon his enormous reservoirs of courage and dignity, and the strong support of his family. Alan refused to admit to a crime he did not commit, even though he would have been paroled from prison years earlier than his 2006 release. Instead he continued to press for access to DNA testing that he knew would prove his innocence. Even though he was told by the police that biological evidence from the crime had been lost, he persisted in his efforts to have it located. Alan eventually reached out to the Innocence Project, and his evidence was found right where police records indicated it should have been all along. Had it been located earlier, Alan could have been released 12 years earlier.

Like so many people, the members of my community were astonished at Alan’s ability to make the best use of his time in prison and then move on with his life. While imprisoned, Alan earned an Associate’s Degree, and after his release, he enrolled at CUNY where he earned his Bachelor’s in Business Administration. He is now working at CUNY to help young people access and complete higher education. He has also recently become a father. His son Eli is now 10 months old.

Any of us would understand if Alan were bitter about his wrongful conviction and imprisonment. But when Shomrei’s Rabbi David Greenstein asked Alan to address the emotional and spiritual component of his experience, Alan responded that he had very strong family support. In fact, he said that his family felt as though they were serving the time with him. He also drew strength from knowing the truth of his innocence. Explaining his positive attitude, he said, “One has to be able to love, because without love, there is no growth.”

Alan and others who have been exonerated, inspire us to be better people, to be more courageous and more forgiving. Their strength and resilience in the face of tremendous hardship continually remind us why we must all fight for a system of justice that is worthy of the name.

Read News Coverage of the event