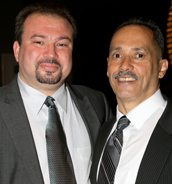 
When William Lopez emerged from the courtroom on Jan 23, 2013, after having been wrongfully imprisoned for 23 ½ years, it was the realization of a dream I had when I started The Jeffrey Deskovic Foundation For Justice. The Innocence Project assisted with my own DNA exoneration in 2006. Since then, I have heard many Innocence Project personnel say that their clients are inspirational and a “walking reminder” of why they do the work that they do. Being on that side of the equation in the William Lopez case was a humbling experience and something that I will never forget.

When the Judge told William that he was free to leave the courtroom, I could see the look of shock and disorientation on his face though this moment was what he had been working toward for many years, not dissimilar to what I experienced over six years ago.

Though this was William’s moment, I was not an unaffected observer. As he walked from the defense table towards the door, I felt the surreality of the moment, having, through my Foundation, played a role in winning his freedom. After he embraced family members, he embraced me as well, and instinctively I resolved to remain next to him. When we encountered the media moments later, I, too, froze. It was my first time playing the role of spokesperson for an organization that had assisted in winning a man’s freedom.

It was breathtaking to host and celebrate his first meal immediately following his release: chicken parmesan and shrimp cocktail, along with a glass of wine. William and I were on cloud nine being able to talk to each other in the free world in contrast to his prison phone calls. After an hour and half, I had the presence of mind to suggest to William that we go shopping so that he could remove the prison clothes that he had been released in. I took him to Macy’s, and as he put on the new clothes, I observed a transformation on his face. I marveled at how far God had enabled me to come from the days of my own struggling upon release.

The case against William, was, as Judge Gaurafis wrote in his opinion granting a writ of Habeas Corpus, “rotten from day one.” William Lopez had been wrongfully convicted of a shotgun murder in Brooklyn. One of the two witnesses who testified against him could not make an in-court identification, causing the trial judge to say that the witness could not have seen what she claimed to see from where she claimed to see it. The second “eyewitness” was a crack addict who had been awake for 24 hours having used 12 vials of crack. She falsely claimed, and the prosecutor certified, that a previous offer of benefit in exchange for her testimony had been withdrawn, when in fact it had not. After Lopez’s conviction, but before his sentencing, an inmate in the county jail had sent an affidavit stating that this witness admitted to her that she was giving false testimony in exchange for favored treatment. Two weeks after testifying, she was released from jail.

As in many cases of wrongful conviction, Lopez’s trial attorney was not very diligent, never even interviewing his client’s two alibi witnesses, much less calling them as witnesses. When William’s brother reached out to the Foundation, his case leapt off the pages to us. Shortly after that, William himself was in touch with us, and eventually the Foundation spoke to his attorneys of ten years Richard Levitt and Yvonne Shiver, who indicated that we could render investigative assistance. The Foundation’s investigation turned up additional evidence of innocence and helped to secure his eventual release.

is a not-for-profit organization founded in 2012, whose mission is to raise public awareness; seek legislative reforms; exonerate the wrongfully convicted, both in DNA and Non-DNA cases; and to assist the wrongfully imprisoned with reintegration. In the upcoming year, the Foundation will continue to network in a search to add board members as well as a spokesperson in order to assist us in building a donor base.

Our goal is to make the organization sustainable beyond the three years that I have guaranteed through my own commitment of $1.5 million and to grow it so that we can add additional investigators and attorneys, increasing our case capacity and hiring support staff. We will build our “mobile community” through an exciting technology through which people can text the word “Innocent” to 50555 to make a $10 donation as well as opt into monthly text message updates on upcoming speaking engagements, TV and radio interviews, and other exciting advocacy work we are engaged in. Program wise, we look forward to encouraging other colleges to offer the wrongful conviction course, which we designed in collaboration with Fairleigh Dickinson University. We also anticipate filing other actual innocence claims, working on wrongful conviction prevention legislation, distributing our Juror Manual, and continuing to raise awareness.