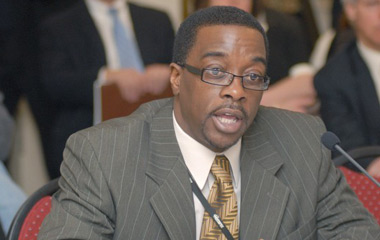 Since he was exonerated in 2006, Alan Newton has spoken in favor of several criminaljustice reforms in New York State – improving police lineup procedures, recording interrogations, providing compensation for the exonerated – but the issue that feels the most personal to him is evidence preservation. “If my evidence had never been located, I would have been just another case. I wouldn’t have a voice,” he said.

For more than a decade, Newton sought the biological evidence that could prove his innocence, only to be told repeatedly that it was lost. The Innocence Project requested one final search in 2004 and found that it was exactly where it was supposed to be all along. Newton has testified about the need for better evidence preservation systems several times, including once at a press conference outside of the Pearson Place Warehouse in Queens where his own evidence was nearly lost.

Most recently, Newton spoke at two public hearings before the New York State Bar Association’s Task Force on Wrongful Convictions with Innocence Project Co-Directors Barry Scheck and Peter Neufeld and a number of other New York exonerees. The Task Force’s final report, issued this year, includes a proposal for modernizing the state’s evidence preservation system and extending the amount of time that forensic evidence must be retained, among other criminal justice reform recommendations. Since then, New York State’s highest court has created a permanent innocence commission to develop reforms to prevent wrongful convictions and monitor how those reforms are

working. This commission will be a model for other states. Its creation is in no small part due to the efforts of Newton and other New York exonerees.

Newton says, “As exonerees, we already have access to the media and to political figures and to people that could affect policy.” Newton has finished a degree in business administration and is applying to law schools. He hopes that with a law degree, he’ll have even more leverage to influence public policy.

There is no more compelling voice in the call for criminal justice reform than the voice of a person who has been wrongfully convicted and exonerated. All exonerees, simply because of their personal experience, have an important and instructive story to tell, and they are all advocates in their own right. Newton says, “I think this is the type of work that exonerees do all their life. Whether we’re actually physically out there or not our names speak for us."

These stories first appeared in the Innocence Project in Print – Summer 2009.