The Innocence Project stands with Ahmaud Arbery, presumed guilty and robbed of his life in broad daylight.

Artist Theo Ponchaveli paints a mural of the likeness of Ahmaud Arbery in Dallas, Friday, May 8, 2020. Ponchaveli said that he was inspired to paint the mural after seeing the video of Arbery's death on a news broadcast and learning that today would have been his birthday. (AP Photo/Tony Gutierrez)

On Feb. 23, Ahmaud Arbery went for a run near his home in Satilla Shores, on the outskirts of Brunswick, Georgia, as he had many times before. The 25-year-old loved to run and was an athlete in high school, but his run and his life were unjustly cut short that afternoon when two white men — father and son Gregory and Travis McMichael — shot and killed Arbery, a Black man. 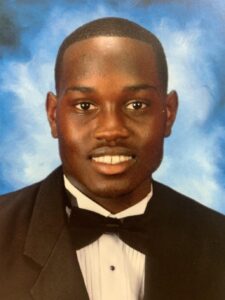 After spotting Arbery on his run, the McMichaels picked up their guns and pursued him in a truck. Gregory told police that he and his son thought Arbery resembled a man suspected of recent break-ins in the area. However, public records showed only one recent burglary in the area in which a gun was stolen from an unlocked truck outside Travis’ house, the Brunswick News reported. Arbery is not reported to have been a suspect in that crime.

The father and son pair claimed self-defense, and for 11 weeks, no arrests were made for the death of Arbery. In fact, after one prosecutor recused herself from the investigation because Gregory had worked in her office as a police officer, a second prosecutor, George Barnhill, took over the case and found no reason to charge the McMichaels for the killing of an innocent man at all. Barnhill eventually recused himself because his son had previously worked with Gregory, and because Barnhill’s son and Gregory had been involved in a previous, unrelated investigation of Arbery.

It was only after a video showing the two armed men approaching and fatally shooting Arbery surfaced, leading to nation-wide outrage, that the McMichaels were finally arrested on May 7 — one day before Arbery, known as Maud by his friends and family, would have celebrated his 26th birthday.

But we cannot say justice is being served because justice delayed is justice denied. Why did it take three months, a leaked video of Arbery’s violent death, and national outcry for the wheels of justice to be set in motion?

Arbery’s death highlights glaring inequality and racism that pervades all aspects of life in the United States, including the legal system. Throughout history, Black people — and Black men, in particular — have been robbed of the presumption of innocence and a fair shot at justice.

Innocent Black people are seven times more likely to be wrongfully convicted of murder than white people, the National Registry of Exonerations reported. And, while Black people make up just 13% of the U.S. population, they account for 40% of the nearly 2.3 million incarcerated people in the country. This is not because Black people commit more crimes, but, in large part, because of the way Black communities and other communities of color are policed and presumed guilty. Numerous studies have shown that Black and Latinx people are more likely to be stopped, searched, and suspected of a crime (even when no crime has occured), due to implicit and explicit biases.

But Arbery wasn’t even stopped and frisked by law enforcement. He was presumed guilty, judged, and executed by two everyday citizens acting as vigilantes. The McMichaels then continued to live freely and were not held accountable for their actions. Instead they were shielded by law enforcement, until a leaked video of Arbery’s unjust killing made it impossible for them to do so any longer.

The video was released by Alan Tucker, a criminal defense lawyer who consulted with the McMichaels, in an effort to bridge racial and communal tension that has followed the 25-year-old’s death. He wanted to show that “It wasn’t two men with a Confederate flag in the back of a truck going down the road and shooting a jogger in the back,” Tucker told the New York Times.

But the lack of a Confederate flag present at Arbery’s killing does not indicate a lack of racism leading to his death nor in the investigation of his death.

Though the McMichaels didn’t carry a Confederate flag and are not reported to have used racial slurs against Arbery, the McMichaels racially profiled him and assumed an innocent man going for a jog was guilty of a minor property crime — for which they sentenced him to death.

As a Black man, Arbery didn’t have the freedom to safely go for a run in his own neighborhood. Yet, as white men, the McMichaels were given a pass for their fatal “citizen’s arrest” by a prosecutor. If two Black men had carried out a “citizen’s arrest” of a white man in Georgia that resulted in his killing, it is unlikely they would have walked free as the McMichaels did.

For two months after Arbery’s death, his family and friends feared that he would simply be forgotten, especially because their ability to safely protest and gather in his honor have been hindered by the ongoing COVID-19 pandemic. They feared that justice in his case would never be pursued.

Their fear was not unfounded.

The biases seen in Arbery’s case are the same kinds of biases that encourage law enforcement officials to rush to pursue certain suspects with tunnel vision, instead of conducting a robust investigation into several potential suspects. In March, Breonna Taylor was shot dead in Louisville, Kentucky, by police officers who were looking for a man suspected in a drug-related crime. The man did not live in Taylor’s apartment complex and, at the time of her killing, was already in police custody. And not only do law enforcement officials preemptively judge suspects due to their implicit and explicit racial biases, but they also allow their judgement to color investigations. This is often the first step in a case toward wrongful conviction.

People across the U.S. — and the world — honored Arbery’s life this weekend, sharing photos of themselves running with the hashtag #IRunWithMaud. It’s not the 26th birthday celebration he likely would have chosen, but we hope that the increased awareness of racial bias in the criminal justice system raised by his unjust killing will inspire a real effort to dismantle such inequalities and racism and eradicate them from the legal system.

Following the global attention on the case, Georgia Attorney General Chris Carr has asked the Department of Justice to investigate the handling of Arbery’s killing. A different prosecutor has now been assigned to his case for the fourth time.

“I wish the world would have gotten the chance to know Ahmaud, to really truly love Ahmaud,” Arbery’s mother, Wanda Cooper-Jones told “NBC Nightly News” after the McMichaels’ arrests.

To the Arbery family, the Innocence Project mourns Ahmaud’s death and the opportunity to have known this young man. We stand with you in seeking justice for Ahmaud.

As a coach I mourn the lost of a great soul and I want to let his family know, he has a community behind him.
Your Forever Coach#IRunWithMaud pic.twitter.com/0wMWZwHfy4

Today my family and I ran 2.23 miles to honor Ahmaud Arbery. Sending super love to his family and especially his mama today on Mother’s Day 💜✨let’s keep lifting him and his family. We are in this together. #IRunWithMaud

Today, I could not run, so I HIKED for Ahmaud Arbery. JUSTICE should be DETERMINED by the CRIME of the ASSAILANT, not DETERRED by the COMPLEXION of the ASSAILED. #RunWithMaud. pic.twitter.com/1L3necjYx1