After Two Decades in Prison, Helping Other “Homecomers” 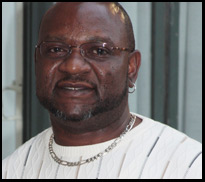 was exonerated six years ago this week in North Carolina.

Hunt, who was only 19 years old at the time, was convicted of first-degree murder based on the testimony of eyewitnesses who claimed to have seen him with the victim. He was sentenced to life in prison, but his conviction was overturned by the North Carolina Supreme Court. In 1989, Hunt was retried before an all-white jury and again convicted of first-degree murder. Although DNA testing on crime scene evidence pointed to Hunt’s innocence in 1994, it would take another decade and numerous unsuccessful appeals before the DNA profile from the crime scene was run in the state database at the request of Hunt's attorneys. The results conclusively exonerated Hunt and pointed to another man who has since pled guilty to the murder.

After his release, Hunt returned to his hometown of Winston-Salem, North Carolina, and founded the Darryl Hunt Project for Freedom and Justice, a non-profit organization dedicated to helping people after their release from prison.

The Project recently changed the formal name of its re-entry program, which helps formerly incarcerated individuals re-integrate into society through job-training and counseling, to the Homecomers Program. As Hunt has said, the name "homecomers" is a positive alternative to "ex-offender," because, "People who are rejoining their communities after serving their sentences deserve a second chance to change and become productive citizens.

That change begins with the label we give them. Words are not neutral, and the term 'ex-offender' continues to follow them in a negative way even while they are trying to turn their lives around." Hunt continues to speak across the country, advocating on behalf of exonerees, while promoting a message of criminal justice reform and compassion.

Learn more about the Darryl Hunt Project for Freedom and Justice

An award-winning 2005 documentary, "The Trials of Darryl Hunt," chronicles the events leading to Hunt's exoneration, including footage taken throughout his long ordeal. The film has raised awareness around the world about the problem of wrongful conviction. Netflix subscribers can

and it’s available for sale on

(a portion of the purchase at Amazon through this link will support the Innocence Project).


Other Exoneree Anniversaries This Week: