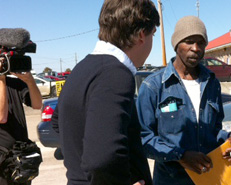 This afternoon, Innocence Project client Henry James walked out of the Louisiana State Penitentiary in Angola a free man for the first time in three decades. DNA results have proven his innocence of a 1981 rape and a judge overturned his conviction last night.

James arrived in New Orleans moments ago to greet supporters and speak with the media about his experience as well as his plans to build a life as a free man at age 50, after losing 30 years in prison for a crime he did not commit. He served more time in prison than any other person in Louisiana cleared by DNA testing.

James was arrested in 1981 after the victim identified him as the perpetrator. Blood type tests from the rape kit pointed to his innocence, but his defense attorney failed to share those results with the jury. James testified on his own behalf, and three alibi witnesses backed up his story. Despite this, the jury convicted him of aggravated rape based on the victim’s testimony and misidentification, and in 1982 he was sentenced to life without parole.

send him a note of support