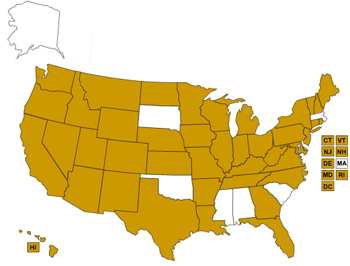 On July 1, Wyoming became the 43rd state in the U.S. that allows prisoners to seek DNA testing on evidence in their case if it has the potential to prove their innocence. This landmark law in Wyoming is the latest in a steady march of progress nationwide over the last 15 years. When the Innocence Project was founded in 1992, not a single U.S. state had a law explicitly granting prisoners access to DNA testing that could prove their innocence. Because these laws weren’t on the books, the Innocence Project and other advocates often had to fight for months or years in court for the right to conduct DNA testing. The first law was passed in New York in 1994. Now there are only seven to go.

And South Carolina could be the next state to grant DNA access to prisoners. In late June, lawmakers there passed a bill granting DNA testing access in cases where it could overturn a wrongful conviction, but the bill was coupled with another that would expand the state’s DNA database to include people arrested for a wide range of crimes, but never convicted. Gov. Mark Sanford, citing civil liberties concerns about the database expansion, vetoed the bill on July 2nd, as he vetoed a similar bill last year. The legislature may vote to override the veto. The Innocence Project supported the DNA access bill and tried to separate it from the database bill.

Click here to learn more about the law in your state

These laws can literally mean life and death for prisoners seeking to prove their innocence. Tommy Arthur has spent 25 years on Alabama’s death row for a murder he says he didn’t commit, but his appeals for DNA testing have been denied at every turn. The Innocence Project has repeatedly called on Alabama Gov. Bob Riley to order DNA testing in Arthur’s case, and Riley has denied the tests. Arthur came within one day of execution in December before receiving a temporary stay. Last year, Darrell Grayson was executed in Alabama despite his pleas for a DNA test that could have proven his innocence or confirmed his guilt.


Even many of the 43 state laws on DNA access have serious shortcomings. For example:

• Some laws present insurmountable hurdles to the individual seeking access, putting the burden on the defense to effectively solve the crime and prove that the DNA evidence promises to implicate another individual.

• Despite the fact that 11 of the 218 individuals proven innocent through DNA testing nationwide initially plea-bargained, certain laws still do not permit access to DNA when the defendant originally pled guilty.

• Many laws fail to include adequate safeguards for the preservation of DNA evidence.

• Several laws do not allow individuals to appeal denied petitions for testing.


What can you do?