A Year After His Release, Dean Cage Is Still Fighting For Justice 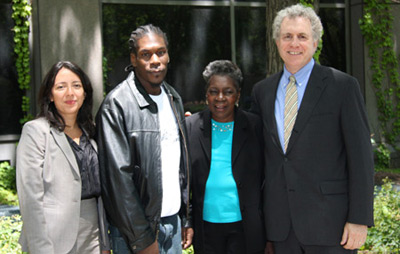 One year ago this week,

was freed from an Illinois prison. He had served nearly 12 years of a 40-year sentence before DNA testing obtained by the Innocence Project proved his innocence and led to his exoneration.

Upon being cleared, Cage reunited with his family in Chicago. He told CBS News that “the support of [his] family, reading novels, playing basketball and faith” helped him to get through some of his toughest times in prison. Although he had missed watching his sons grow up, both of his grandparents’ funerals, and being by his mother’s side during her many surgeries, Cage felt blessed to finally be free. He said: "If you believe in something, fight for it.…The truth will come out in the end.” But Cage realized that he would face new challenges in the years to come. At the time of his release, he did not have any money or material possessions to his name.

filed a lawsuit against the City of Chicago

and others, alleging that he was framed in an effort to quickly end the investigation and reach a conviction. He told the Chicago Tribune this week that although the adjustment to life outside of prison has been difficult, he is beginning to feel more comfortable and recently started working at a restaurant on Chicago’s South Sude.

"It's been kinda rough," Cage said with his mother at his side. A scrapbook of exoneration cases he kept for years while in prison lay open before him. "If I didn't have the support of my family, I don't know what I would have done," he said.


Other Anniversaries This Week: