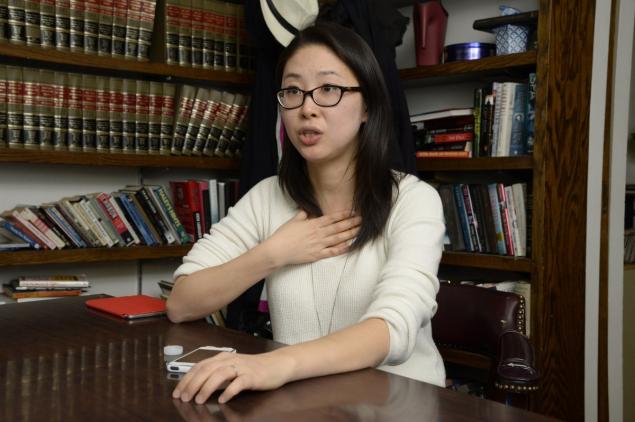 in her curriculum, according to a report in the

Jenna Lee-Walker, a former English teacher at the High School for Arts, Imagination and Inquiry located in New York City’s Upper West Side, said her supervisors at the school “urged” her to adopt a more “balanced” approach in dealing with the infamous case for fear of causing “little ‘riots’” among the schools’ black pupils.

On the night of April 19, 1989, 28-year-old jogger Trisha Meili was brutally attacked and raped in Central Park. She was found unconscious. When she recovered, she had no memory of the assault. Initial police investigations quickly focused on a group of African American and Latino youths who were in police custody for a series of other attacks perpetrated in the park that night

The Central Park jogger case, as it would soon be called, inflamed public sentiment throughout New York City, fueled, in part, by the violent nature of the attack, festering racial tensions and fears spurred by the city’s peaking crime rate. It also resulted in the wrongful convictions of five teenagers –

– who falsely confessed to having perpetrated the crime. On December 19, 2002, the convictions of the five men were overturned based on DNA evidence proving that the crime was committed by Matias Reyes who admitted to police that he had acted alone.

Speaking to the New York daily, Lee-Walker explained that the story of the case was “not only engaging but important” for her students as most of them came from the same neighborhood as the Central Park Five. Nevertheless, she added, she remained “stunned” by the request from her supervisors to “soften her approach.”

“I was kind of like, the facts are the facts. This is what happened,” she explained. “How can you say that in a more balanced way?”

Lee-Walker was ultimately fired from her teaching position in May 2015 and has since “filed suit in Manhattan Federal Court, and named the Department of Education and several school administrators as defendants,” according to the Daily News.

The news story notes that Lee-Walker did not specify damages in her suit while the city law department has declined to comment on the litigation.

by Ken Burns, David McMahon and Sarah Burns.  Members of the Central Park Five have also spoken to audiences throughout the nation about their wrongful conviction.