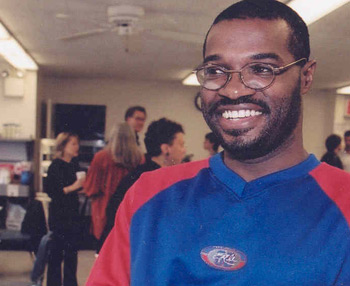 marks 10 years since his exoneration in Massachusetts. The Innocence Project began working on Miller’s case in 1998, and DNA proved his innocence and led to his release on May 10, 2000.

Miller’s 1990 conviction of aggravated rape and robbery rested almost entirely on the victim’s misidentification of him. After the crime, the victim reviewed books of photos with police officers, eventually identifying Miller’s photo. The state tried Miller based on the victim’s identification and improper forensic findings from the Boston Police Department crime lab. An analyst testified that biological materials from the crime scene matched the Miller’s blood group – but failed to point out that the markers could also have come from the victim. Miller was sentenced to 26-40 years he prison. He would serve nearly a decade before he was freed in 2000.

In 2004, Massachusetts adopted amendments to its rules of criminal procedure, mandating that prosecutors disclose to the defense “[a] summary of identification procedures, and all statements made in the presence of or by an identifying witness that are relevant to the issue of identity or to the fairness or accuracy of the identification procedures.” Moreover, in 2004, Suffolk County and the Boston Police Department announced the formation of a Task Force on Eyewitness Evidence in order to review faulty procedures and adopt appropriate changes. Later that year, both departments adopted a variety of new practices, including requiring investigators to use blind and sequential lineup procedures when practical and to explain any deviation when not. Significantly, prosecutors are required to investigate and document the identification evidence in great detail and must present all potential felony prosecutions involving “complex investigations, difficult issues and close calls on charging decisions” to a panel of senior prosecutors.

released in December by the Boston Bar Association called for sweeping reforms to improve the accuracy and reliability of the criminal justice system in Massachusetts, including trainings for judges and law enforcement agencies on recommended identification procedures.

Other Exoneration Anniversaries This Week: