86 Exonerees in One Room 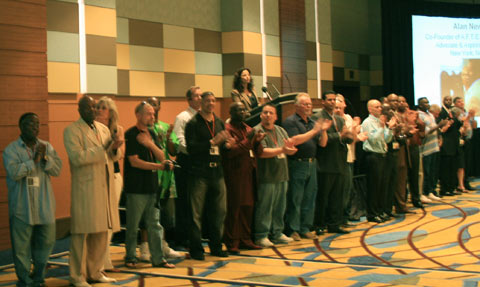 The tenth annual Innocence Network conference concluded yesterday in Atlanta — it was a weekend packed with inspiring stories, useful research and legal analysis and the formation of networks that will last for years.

Nearly 500 people from around the world participated in the conference, including 86 people exonerated after serving years in prison for crimes they didn’t commit. It was the largest group of exonerees ever to come together in one place.

The 86 exonerees were introduced at the conference’s opening session — the photo above shows just part of the unprecedented group. Immediately following their introduction was the announcement of the network’s first-annual awards, honoring two Ohio reporters and a retired Washington, D.C., police detective, who called the recognition “the greatest honor of (his) career.” The Network’s first Lifetime Achievement Award was given posthumously to Pennsylvania investigative reporter Pete Shellem, and his wife accepted the honor with a moving speech that left few dry eyes in the room.

More on the Network Awards is here

The weekend continued with sessions on a huge variety of topics, from legal storytelling to false confessions, to life after exoneration and ethics (

a full agenda and list of speakers is here

). One track of sessions was dedicated to the exonerated attendees; facilitator Chris Corrigan wrote

about his experience at the conference.

To see what others were saying about sessions during the weekend, visit the twitter hashtag

Stay tuned in the days ahead for more from the conference, including video and more photos.