A judge will rule whether Mr. Payne will serve consecutive or concurrent life sentences. 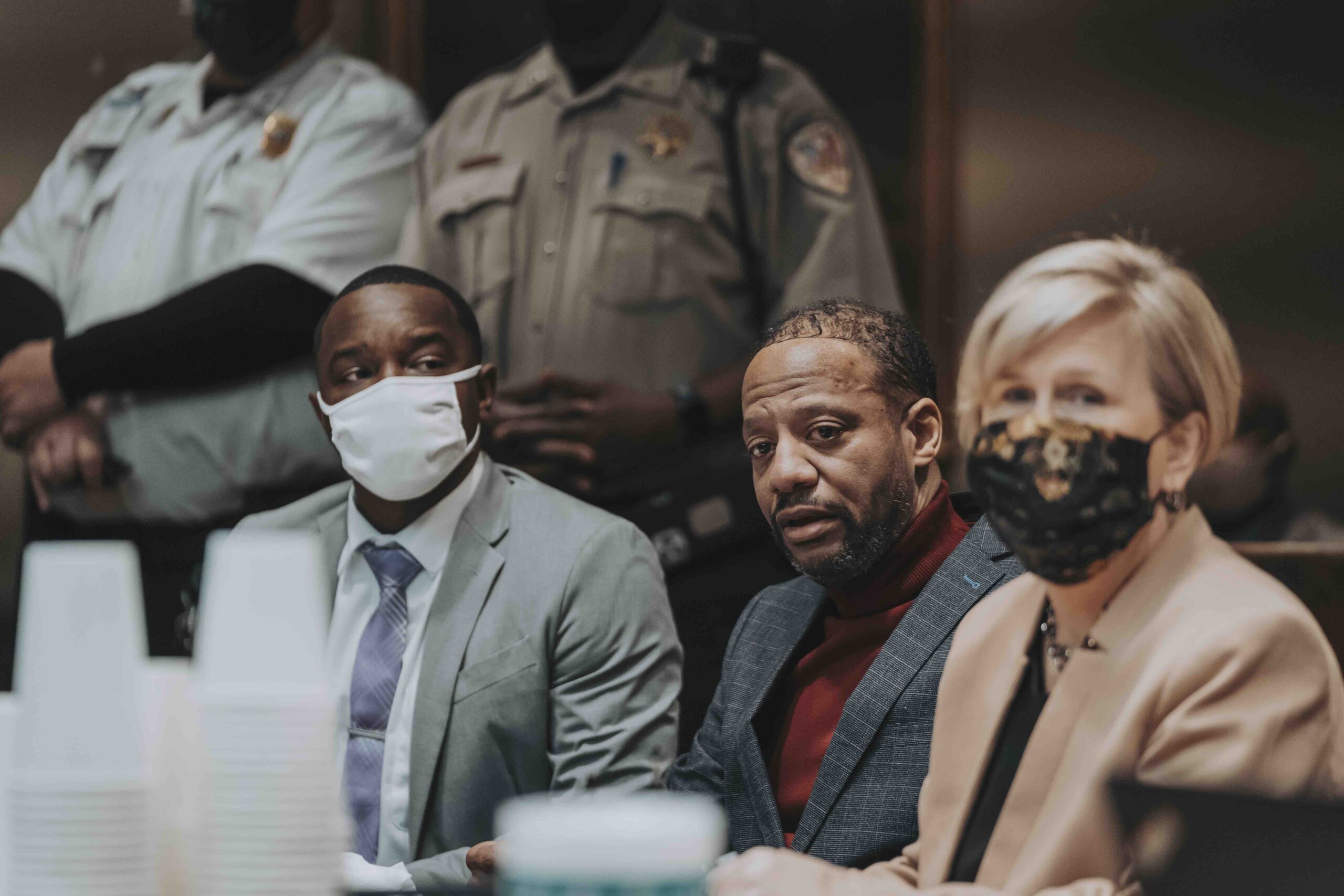 Pervis Payne’s two-day resentencing hearing began on Dec. 13. Shelby County Judge Paula Skahan will determine whether Mr. Payne will serve consecutive life sentences — meaning he would likely die in prison — or concurrent sentences, which would make him eligible for parole within six years.

Mr. Payne spent 33 years on death row for a crime he maintained he did not commit until last month when the Shelby County District Attorney’s Office conceded that Mr. Payne is a person with an intellectual disability, making it unconstitutional to execute him. Mr. Payne was subsequently removed from death row on Nov. 23.

Judge Skahan heard the testimony from 15 of Mr. Payne’s family, friends, and teachers, who spoke to his “loving” and “gentle” character on Tuesday and demonstrated to the judge that Mr. Payne would not pose a threat to society if released. Many of the witnesses also stated their willingness to support and even house Mr. Payne if and when he is released and transitions home.

Over three decades, Mr. Payne’s prison record contains no disciplinary infractions and on Dec. 14, the defense introduced four prison officials who spoke to that record and his “respectable” nature. On one occasion, Mr. Payne risked his life to save Captain Mosley from an attack by another incarcerated individual, that left him with 57 stitches.

We’ve compiled the most compelling moments from the testimony. Take a look.

1. Rolanda Holman, Mr. Payne’s sister, shared fond memories of their childhood. “[Pervis was] very loving and supportive,” she told the judge. “He’s also been known as a nice and kind person in church, helping the elderly get back and forth to their cars. Whatever was needed of him. He always gave a helping hand.”

“Just a nice, really kind guy.”
— Rolanda Holman, about her older brother #PervisPayne. She is the first witness the defense calls and could not remember a time her brother was angry, in trouble, or using drugs. pic.twitter.com/ENjZ2JMGuj— The Innocence Project (@innocence) December 13, 2021

2. Pastor Carl Payne, Pervis’ father, asked the judge if she knew what a “gift of help” was. “Pervis had a ‘gift of helps’…. [He was] always helping somebody,” the pastor explained. Prior to his wrongful conviction, the elder Mr. Payne could not remember a time when his son was in trouble.

3. Sylvester Robinson, Mr. Payne’s cousin and best friend, described him as “a giver” and cited several examples of how Mr. Payne had helped him in school and others at church. “Anyone who knows Pervis would say that,” he added.

4. Pastor Darrien McGraw, Mr. Payne’s cousin, remembered him pulling over to help someone on the side of the road who needed gas. “He always wanted to help people,” Mr. McGraw told the judge.

5. Damon Wherry, Mr. Payne’s childhood friend, choked up while describing what a good friend Mr. Payne was to him, highlighting his generosity with his time and more. “He’ll move his day around just to make you happy. Everything I asked, he did for me. He did a lot for me.”

7. Dr. George Kevin Riggs, a pastor who has worked with hundreds of people in prison and on death row, explained that Mr. Payne is often assigned the job of buffing the prison floors, a job he described as being reserved for those who have earned the respect of their peers. “He’s one of the ones that is well respected among everyone,” Dr. Riggs said. “I have never heard anyone say anything negative about Mr. Payne.”

8. “In the 11 years that I’ve been in [death row],” Dan Mann, who visits death row every Monday night said, “Pervis is one of those [people] that genuinely everybody in there cares for, they respect, they believe in his innocence.”

“In the 11 years that I’ve been in [death row], #PervisPayne is one of those that genuinely everybody in there cares for, they respect, they believe in his innocence.” —Dan Mann @NashvilleMann pic.twitter.com/vjXdJHn2vy— The Innocence Project (@innocence) December 13, 2021

9. Dr. Phyllis Hildreth, a professor and meditation instructor who teaches on death row, eagerly shared that “Mr. Payne is one of my favorite students … very attentive … just a delight.”

10. Janet Wolff, who has worked with Mr. Payne as a mediator and teacher at the Riverbend Maximum Security Prison Institution for 11 years, described Mr. Payne as “wide open” with a “big heart.” “He listens well,” she continued. “He often was the person who would check in on others. “Other folks are grateful to Pervis. He is consistent about listening to other people.”

11. “Pervis has a particularly gentle side to him,” said Demetria Kalodioms, a journalist and friend of Mr. Payne. She recalled a conversation the two had about crickets after Mr. Payne learned that Ms. Kalodioms had pets. Mr. Payne said that he kept “pets” of his own in prison — crickets that would occasionally come to his cellblock and which he had learned to feed and care for. Mr. Payne told her that he raises them with the goal of releasing them into the wild.

12. David Bass has visited Mr. Payne about 20 times over the last few years. During that time, he observed how much Mr. Payne’s peers in prison care for him and described Mr. Payne as “loving, caring, kind, compassionate.”

13. Jeff Dobyns, a member the religious non-profit organization Men of Valor told the judge he would gladly host Mr. Payne upon his release. “​​I know there’s a lot of people who want to have Pervis live with them, but I’d like to have him live with me,” he said.

14. John R. Davis, a member of Men of Valor, who runs a men’s group at Riverbend, described Mr. Payne as a “humble, sweet, gentle man.” “In our men’s group, Pervis sits back and waits for everyone else to talk. He is humble and not looking for the spotlight. Many times, he will come out and say some things that are impactful for the entire group.”

15. Rudy Kalis, who volunteers with Men of Valor, and has become Mr. Payne’s spiritual advisor, shared that he liked “the spirit that came from him.” Within a matter of minutes of meeting Mr. Payne, Mr. Kalis knew he was special, he told the judge.

16. Tony Mays, Warden at Riverbend prison since 2012, describes Mr. Payne as an “introvert” who had never been “loud” or involved in any disruptive activity.

17. Associate Warden Michael Keys knows Mr. Payne as “low key, not high strung”. “Very respectful, very polite.” Mr. Keys remarked on how it can be an inconvenience to constantly remind the men on the floor what to do, but for Mr. Payne that has never been the case. “You don’t ever have to tell him what to do. He is always working … He’s always staying busy … Always respectful to staff.” Mr. Keys also confirmed that Mr. Payne had not had a blemish on his record for his entire time behind bars.

18. Associate Warden Earnest Lewis added that Mr. Payne “has never been a problem”. “We’ve never had any issues with Mr. Payne. I’ve spoken to him on a number of occasions about sports and what not.”

19. When Captain Mosley was attacked in prison, leaving him with 57 stitches, Mr. Payne and a peer came to his rescue. “They both grabbed me, put towels on me, without thought or concern for themselves.” Pervis “consoled” the captain and waited 11 minutes until the medics arrived. Mr. Payne “conducts himself as a man,” Mr. Mosley continued.  He “treats you with respect. Personable. I respect him very much.”