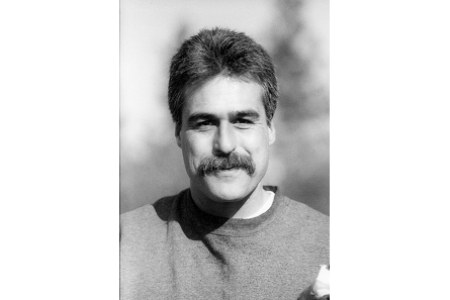 On November 29, 1994, a 13-year-old girl was attacked while walking to school in Lodi, California. She said a man punched her in the face and dragged her into an alley where he raped her from behind.

On November 29, 1994, a 13-year-old girl was attacked while walking to school in Lodi, California. She said a man punched her in the face and dragged her into an alley where he raped her from behind.

After the man fled, the girl flagged down a passing car, told the driver she had been raped and asked for a ride home. As they drove off, the girl pointed at a man walking on the street and said, “There he is!”

She was taken to a hospital where semen and foreign pubic hair were found in her underwear. She repeatedly told police and her family that she had not seen the attacker’s face.

The man who was driving the car when the girl saw her attacker on the street described him as a white man with long hair and a mustache, wearing a bandana on his head, a green army jacket, black sweat pants, brown boots and gloves. A composite drawing was published in a local newspaper.

The victim’s aunt saw the composite and called police, saying the drawing looked like 27-year-old Peter Rose, whose girlfriend was a friend of the victim’s aunt.

Police prepared a photographic lineup containing a photograph of Rose and showed it to the driver of the car and the victim, but neither selected Rose. The driver selected someone else.

The victim’s aunt told the victim that Rose’s girlfriend had said he wasn’t home at the time the girl was attacked. The aunt took the victim to Rose’s home to search for evidence.

In December 1994, detectives brought the victim to the police station and interviewed her. When the girl denied knowing her attacker, the detectives accused her of lying and of being a prostitute and a gang member, and ridiculed her belief in God.

At one point, the girl finally mentioned Rose and said, “My Aunt Wendy talked to his girlfriend and his girlfriend said he wasn’t home that morning and he’s been acting weird ever since.” But she maintained that she didn’t know if her attacker was Rose.

After three hours, the detectives showed the victim a photo lineup and she selected Rose. Rose was arrested the following day. Police searched his home and found a pair of black sweatpants.

At a preliminary hearing in February 1995, the driver of the car said he was 80 percent sure Rose was the man that the victim pointed out on the street shortly after the attack. The victim testified that she was 100 percent certain Rose was her attacker.

Rose went on trial before a jury in San Joaquin County Superior court. Crime laboratory analysts testified that they were unable to obtain a DNA profile from the biological evidence, but that based on visual examination of the pubic hair, Rose could have been the source of the hair. Serological tests on the semen were inconclusive, but one analyst said that Rose was within 30 percent of the population that had a genetic marker found in the semen.

In a tape recording of the victim’s interview with detectives, she repeatedly said she didn’t know who attacked her, but Rose’s defense attorney failed to use this. Rose was convicted on November 3, 1995. He was sentenced to 27 years in prison.

In December 2002, after years of unsuccessful appeals, Rose sought the assistance of the Northern California Innocence Project. Students under the supervision of attorney Janice Brickley and the program’s director, Golden Gate University Professor Susan Rutberg, determined that the semen sample still existed and filed a motion for DNA testing.

In 2004, the tests excluded Rose, and on October 29, 2004, he was released from Mule Creek State Prison. Among other items of evidence discovered by the students were bench notes from the original laboratory analysis of the semen. The notes showed that the blood type identified in the semen was not Rose’s blood type.

A few days after Rose’s release, the rape victim, by then 23 years old, contacted a newspaper reporter and recanted her 1994 identification of Rose. She told the reporter, “I’m not sure. I wasn’t sure,” and attributed her certainty on the witness stand at Rose’s trial to pressure by the police.

The young woman said she “went along with the police because they seemed to have evidence lined up against Rose.”

Despite the new evidence of Rose’s innocence, the prosecutor asked for further DNA testing before agreeing to dismiss the charges, arguing that the semen might have come from a consensual sex partner.

In January 2005, the victim’s ex-boyfriend’s DNA sample was compared with the DNA extracted from the girl’s clothing and the ex-boyfriend was excluded.

In February 2005, the charges against Rose were dismissed.