With Passage of Oklahoma Bill, DNA Testing Guaranteed in All 50 States 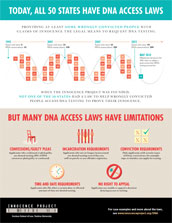 Oklahoma Governor Mary Fallin signed a bill into law Friday that provides people in her state the right to DNA testing that could prove they were wrongly convicted. The legislation had previously passed unanimously through both houses of the Oklahoma legislature. With the passage of this law, all 50 states now have a law guaranteeing DNA testing to those convicted of crimes, though many of these laws have significant limitations.

Laws like the one passed in Oklahoma are important for the wrongfully convicted because they provide a guaranteed means to DNA testing. Without such laws, prisoners have no statutory right to testing and must convince judges or prosecutors to grant them access.

, who was falsely convicted of murder and spent 16 years in prison in New Jersey, struggled for years to have evidence tested until a DNA testing law was passed in his state.

Oklahoma’s testing law is one of the most comprehensive in the nation, but some laws in other states have limitations which can be significant. Several states specifically exclude those who pled guilty or confessed, even though more than a third of the 307 people exonerated by DNA testing either falsely confessed or pled guilty.

what the law is in your state