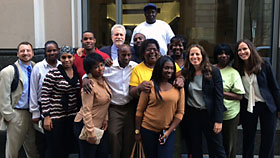 Friends, family and attorneys of Anthony Wright celebrate the dismissal of his conviction.

The latest issue of

magazine has a feature article on Innocence Project client Anthony Wright, who remains locked up although his convictions for rape and murder were overturned in September by a Philadelphia Court of Common Pleas judge after new DNA testing revealed that another man committed the crimes. Entitled, “Why is This Man Still in Jail?” the article by Paul Solotaroff recounts how egregious force and corruption by local law enforcement led to Wright falsely confessing to the 1991 rape and murder of Louise Talley, 77-year-old woman from North Philadelphia, and how improper defense failed to protect him in court. The article details Wright’s ongoing struggle—bolstered by his post-conviction defense team at the Innocence Project—to win his freedom over the past nearly 24 years and asks why Wright languishes behind bars although he’s been lawfully cleared of any wrongdoing.